A story appeared recently about an incident at a hospital in Tennessee.  Nurses came and got a healthy newborn from his mother and took him for what mom believed was a routine physical examination.  A little while later they returned and told mom that the operation went well.  Mom exploded; there was nothing wrong with her son and she had not authorized any operation.  Turns out that the nurses had brought the wrong baby to the operating room and the surgeon did not catch the mistake.  While not happening in exactly the same way, “wrong patient”, “wrong site” malpractice occurs many times every day in this country. 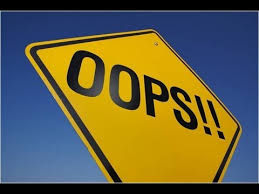 A friend of mine was in the hospital a few weeks ago and, after he was safely home, told me about some of his misadventures while he was there.  One day the nurse came to him and said it was time to check his blood sugar because of his diabetes.  He doesn’t have diabetes. The nurse had the “wrong patient.”  On another day, another nurse told my friend that they had changed his breathing treatment to include the medication he was taking at home.  He was not taking any medication at home.  “Wrong patient” again.

Fortunately for my friend, he caught the mistakes before any harm was done.  Not everyone is so fortunate.  I saw a few stories as I was researching this post that made me shudder.  A baby with a cancerous eye has his good eye removed.  “Wrong site” malpractice.  A neurosurgeon clips the blood vessels on the wrong side of the brain.  “Wrong site” malpractice.  A surgeon performs eye surgery on the wrong patient.  “Wrong patient” malpractice.  According to an impartial study by a medical industry group devoted to improving health care, “wrong site” surgeries occur 40 times a week in the United States.  Other estimates are higher.

“Wrong site” surgery and “wrong patient” surgery are what are called “Never Events.”  I have written about them in the past.  They are not the result of a mistake in judgment or a slip of the knife during surgery.  They are purely the product of carelessness and should never happen.  If hospitals, doctors, and nurses follow approved procedures, these mistakes cannot happen.

There are a few things you can and should do to prevent “wrong site” or “wrong patient” malpractice.  Before any surgical procedure, tell your name to anyone who will listen to you.  Spell your name and give your date of birth.  There may be a patient in the hospital with a name which is quite similar to yours.  Ask to speak to the surgeon and the anesthesiologist and spell your name for them.  Ask the surgeon to mark the location on your body where he or she intends to perform the surgery.  Ask them to do it in your presence so you can verify that it is the correct site.  There are even signs you can purchase to wrap around your good arm or leg to inform the surgeon that he or she is not to operate there.  If you don’t use those, consider writing on your own body to warn against “wrong site” surgery.  Before any surgery can be performed, the surgeon must get your consent in writing.  READ THE CONSENT FORM.  Make sure that the surgery described in the consent is the surgery you want.  If you do not understand the consent form, ask questions about it.  Don’t be a timid patient who assumes everything is going to be okay only to awaken and find that you have been the victim of a “wrong site” or “wrong patient” surgery.