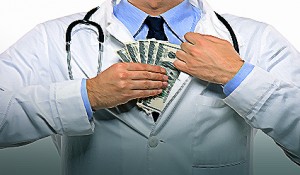 Last week I wrote about doctors committing fraud.  This week I want to write about a particular physician who breached the trust of his patients, exposed them to unnecessary tests and surgeries and may have contributed to the deaths of some of them.

Like many of the other physician fraudsters, Dr. Harry Persaud, a cardiologist from Westlake, Ohio, a suburb of Cleveland, was a respected and trusted physician.  Dr. Persaud was charged in federal court with cheating the Medicare program and private insurers by ordering tests his patients did not need, performing heart catheterizations on the basis of phony test results and placing cardiac stents in patients after falsely claiming that they had blockages in their coronary arteries.  He was convicted after a four week trial.  He is also being sued for medical malpractice by some of his patients who claim that his unnecessary procedures have harmed them.

No medical tests are without some risk to the patient but the ones Dr. Persaud ordered present more risk than most.  He was injecting radioactive dye into the arteries of his patients so that any narrowings or blockages in the coronary arteries would appear on x-ray.  In addition to the obvious risks associated with the use of radioactive substances in the body, these procedures involve the risk of bleeding, heart attack, puncturing a blood vessel, infection, allergic reaction and stroke, to name a few.  After he did that test, he falsely told some of his patients that they had blockages which required that he place a stent to re-expand the coronary artery and keep the blood flowing to the heart muscle.  Stent placement presents all of the same risks as coronary catheterization plus a few more.  Placement of a stent is not something an ethical doctor does unless the patient really needs it.

Apparently, Dr. Persaud went over to the dark side when his patient base began to shrink and he felt he needed to take special steps to keep the money flowing.  According to federal investigators, his total take from Medicare and private insurers was over $7,000,000 during a six year period.  He was convicted of fraud, falsifying documents and money laundering.  Dr. Persaud was recently sentenced to 20 years in a federal prison.

Most doctors are honest people who try to do the right thing.  Unfortunately, there are some who are only in it for the money and who will sell a patient out to make a buck.  Be trustful but at the same time watchful.  Remember, just because a doctor says it does not make it so.