Technology Comes For The Humble Stethoscope.

Two hundred years ago, a Frenchman invented a tube with which he could listen to heart and lung sounds.  This was the first stethoscope.  Heart disease is one of the major causes of death throughout the world.  Often the abnormalities that are part of heart disease make sounds that give them away to a trained listener using a stethoscope.  Among the defects which can sometimes be heard through use of a stethoscope are diseased heart valves, certain heart arrhythmias, congestive heart failure, hypertensive disease, some structural heart disease.  Much of the effectiveness of the stethoscope depends, however, on its use in a quiet environment and the skill of the health care provider doing the listening.  Technology promises to change all of that and make the stethoscope a more effective tool for detecting disease and identifying treatments. 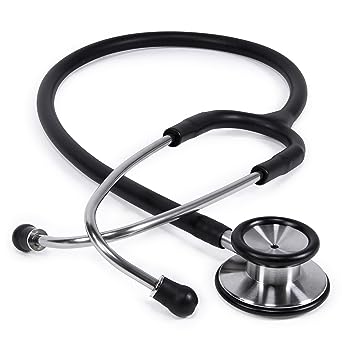 There is no shortage of ideas about how to improve the stethoscope by taking advantage of today’s technology.  Start ups are incorporating artificial intelligence, algorithms, visual displays, recording devices, and direct internet connections.  If you can think of it, so have they and long before you did.  For the sake of simplicity, let’s call these new devices “digital stethoscopes.” First and foremost, the various digital stethoscopes convert sound into electronic signals which can be amplified to a comfortable level.  This lessens the need for a quiet room which is necessary to hear the soft sounds often required for diagnosis.  Some of the digital stethoscopes also use noise cancelling technology.

In programming the digital stethoscope, manufacturers can take advantage of large data sets of patients with heart or lung disease and the sounds associated with those conditions.  They can also receive and make a record of the electrical signals of the heart in the same way that an EKG does.  In some very promising studies, the digital stethoscopes were able to diagnose heart and lung problems with greater accuracy than even highly experienced cardiologists and pulmonologists.  In one study conducted by a manufacturer, it reported that its digital stethoscope recognized heart murmurs in children more often than five trained pediatric cardiologists using stethoscopes.

One of the advantage of the digital stethoscope is that it can “hear” sounds that are outside the ability of the human ear to recognize.  These are important sounds which cannot be heard by even the most talented and skillful human examiner using a traditional stethoscope.  These previously unheard sounds will open new avenues for diagnosis.

In some cases, the new digital stethoscopes were able to detect pre-cursor sounds that indicated a problem was developing that could not be detected yet with other testing.  Many of the stethoscopes allow their results can be stored and shared among physicians.  Even the Apple watch now has a feature that can record and recognize some abnormal heart rhythms.

Next time the nurse practitioner tells you she wants to listen to your chest, she may be holding a digital stethoscope.  Count this as one of the good results of technology and take a deep breath for her.