“Time is brain” is what neurologists and neurosurgeons say to emphasize the importance of seeking prompt treatment in the event of a stroke.

There are two types of strokes and they can both be terrible.  The first type is the hemorrhagic stroke. 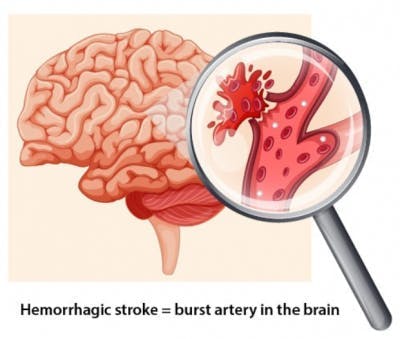 As its name implies, it occurs when a blood vessel in the brain begins to bleed.  Sometimes, the bleed can be small but, at other times, it can be a full-on hemorrhage.  Blood is very irritating to the tissue of the brain.  Its presence can damage the brain and prevent it from functioning properly.  It can cause other vessels in the brain to go into spasm.  It can cause the brain to swell and can increase pressures inside the skull.

What the doctors do in response to a hemorrhagic stroke depends on the size of the bleed and the degree to which pressures rise inside the skull.  If the bleed is small enough, doctors may just wait and watch to see if the bleed stops on its own.  If it does, no invasive brain surgery is necessary.  On the other hand, if the bleed is larger, it may cause dangerous rises in pressure.  Most of the management of a hemorrhagic stroke is devoted to monitoring and managing pressures inside the brain.

The second type of stroke is called an ischemic stroke. Ischemia means not enough oxygen is reaching the tissue.  In the case of an ischemic stroke, it occurs because a blood clot has completely or partially blocked an artery in the brain.  As with the hemorrhagic stroke, the part of the brain downstream from the clot does not get enough oxygen and can die as a result.

Doctors treating a patient who is experiencing an ischemic stroke can administer drugs called “clot busters” that can break up the blood clot and restore the flow of blood to the brain.

The sooner the stoke patient arrives at the hospital, the sooner he or she can be evaluated to determine the type of stroke which is present.  The last thing the doctors want to do is administer clot busting drugs to a patient having a hemorrhagic stroke.  Clot busters work by reducing the body’s ability to form blood clots.  If anything, clot busters would make a ruptured artery bleed more freely.

The sooner the doctors can identify an ischemic stroke, the sooner they can determine if the patient is a candidate for clot busting drugs.  The longer the time before the patient arrives at the hospital following the onset of an ischemic stroke, the more likely it is that the brain tissue, which has been deprived of oxygen, will die.  At the present time, patients with ischemic strokes are recommended to receive clot busters only within three hours of onset of the stroke.  While some doctors may give clot busters even after three hours, the chances for successful restoration of brain function are greatly reduced.  At four or five hours, most doctors won’t even try clot busters.

No matter the type of stroke a patient might experience, it is critical to get to the hospital as soon as possible.  Some of the symptoms of stroke are sudden weakness, paralysis of a limb or weakness on one side of the body, inability to speak, drooping of the mouth or eye, difficulty walking, nausea and vomiting, a sudden “thunderclap” headache, confusion, and inability to look at bright light.  If you have any of these symptoms or if you see them in a friend or loved one, call 911 immediately.

“Time is brain.”  The sooner a stroke patient is evaluated and treated, the better the quality of the recovery.