Newest MRI Technology Will Save Lives

“Time is brain.”  When a patient has a stroke, the sooner treatment can be begun, the better the outcome.  For strokes which occur outside the hospital, and that is most of them, valuable time is sometimes lost before the patient or someone around the patient recognizes something is terribly wrong and calls 911.  More time is lost transporting the patient to the hospital.

Once the patient arrives at the hospital, there is one more critical step which must be performed before treatment can be begun.  The patient must be imaged to determine if the stroke is one caused by blood clots, an ischemic stroke, or one caused by bleeding into the brain, a hemorrhagic stroke.  Blood thinners, which can be a vital form of treatment for an ischemic stroke, cannot be given to a patient with a hemorrhagic stroke for obvious reasons.  If the hospital does not have an MRI machine or if the MRI machine is in use, even more valuable time can be lost.  Enter the Swoop MRI machine. 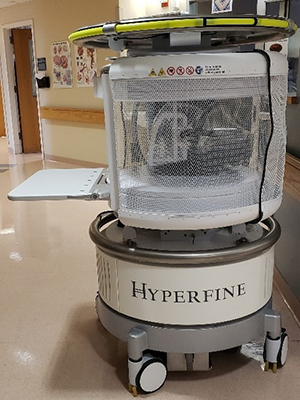 The Swoop MRI is another example of the march of technology in medicine and elsewhere.  It is sometimes hard to believe that the Apple iPhone only came into existence a little less than 15 years ago.  It seems like it has been with us forever.  The Swoop won’t be the last new invention to take advantage of the advances in chip making and miniaturization.