I recently lost one of my sisters to sepsis.  She got an infection that lingered until her immune system couldn’t deal with it any longer and it sent her body into septic shock, which killed her.  Over a quarter of a million people in the United States die of sepsis each year.  Six times that many develop sepsis each year but manage to survive.  However, those who survive sometimes are left permanently damaged from their bout with sepsis.  Sepsis is becoming more and more common as our population ages.  It is now the 10th leading cause of death in the United States. 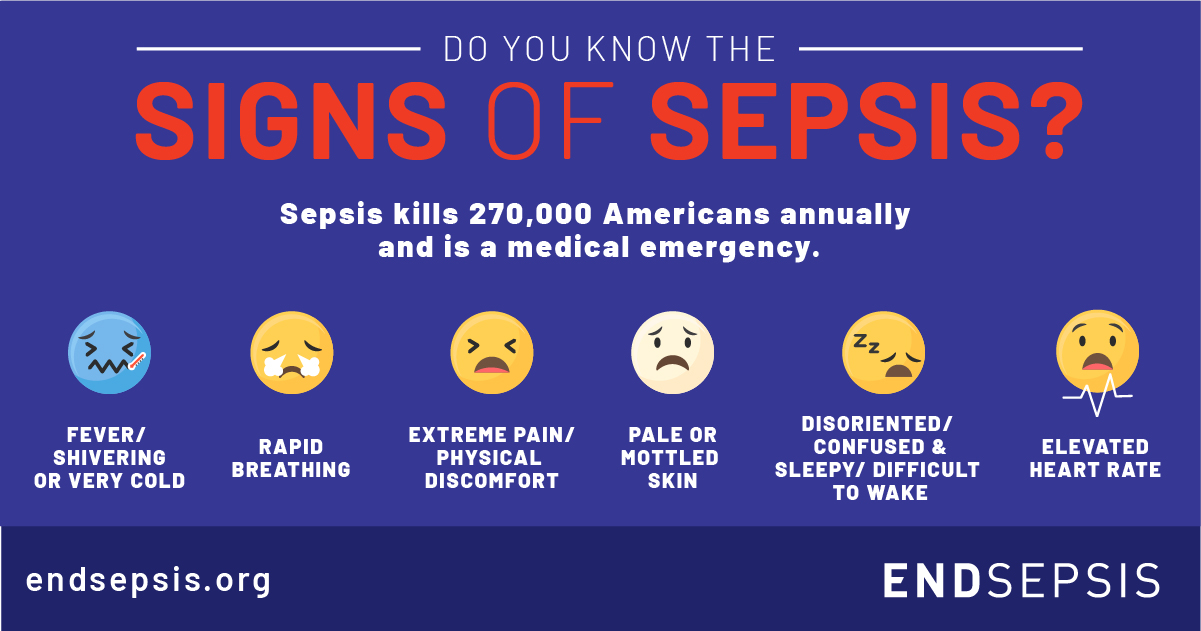 Our bodies generally do a good job of dealing with injuries and illnesses.  Over millions of years, evolution has tried out many solutions to these problems.  It has generally kept the ones that are successful and discarded those which are not.  Sometimes, however, we can have too much of a good thing and that is pretty much the case with sepsis.

Sepsis occurs when the body overreacts to an infection.  The infection is most often bacterial but viral, fungal and protozoan infections can cause sepsis as well.  Infants, children and older adults are particularly susceptible to sepsis.

Our bodies usually handle infections effectively.  Our immune system detects them and sends white blood cells and other killers to attack the invaders.  The immune forces successfully kill off the infection and subside.  Sometimes, however, and for reasons that are not well-understood, the immune system perceives the threat to be so great that it needs to bring out its largest guns.  Continuing the battle imagery, this is like setting off multiple nuclear weapons.  It cannot be done without causing a lot of collateral damage.

The substances sent out by the immune system tell the body to produce inflammatory cells, which in turn cause the blood vessels to dilate and leak.  This in turn interferes with the blood’s job of oxygenating the organs and tissues.  One of the ways in which it interferes is by causing blood pressure to drop.  This is sepsis.  Sometimes the drop is so severe that the organs do not get enough oxygen to operate properly and begin to shut down.  This leads to what is called multi-organ failure.  When the organs fail, they don’t provide the necessary support to the circulatory system which causes further damage to circulation.  Now the body is in septic shock and the potential for death is high.

As should be apparent by now, sepsis is a medical emergency with the potential for death.  It needs to be addressed as soon as possible.  It has been estimated that every hour of delay in treating sepsis decreases a patient’s chances of surviving by 8%.  Prompt treatment, of course, requires that we be able to recognize sepsis when it appears.  Unfortunately, sepsis shares its symptoms with many other illnesses.  Even well-trained doctors sometimes have difficulty recognizing sepsis because it is often accompanied by other medical conditions which have similar symptoms.

Err on the side of caution and prudence.  Seek prompt treatment, even if you are unsure whether the symptoms you are seeing are the result of sepsis or something less life-threatening.  The sooner sepsis is recognized and treatment is begun, the better the chances of survival without permanent damage.  The poster above from an organization dedicated to treating sepsis is helpful in identifying some of the symptoms of sepsis that should lead a patient or the patient’s family to seek prompt medical attention.  Be aware of these symptoms of sepsis and act promptly.