Doctors are not immune to the mores of the society around them.  It seems that everywhere we look today, we see a coarsening of society.  Past generations may have cursed, but they didn’t do it all the time or loudly in public.  Certain subjects, which were not discussed in polite society, are all over television and the print media today.  Cases of road rage and public boorishness abound.  Doctors are following suit. 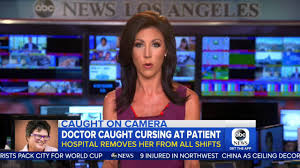 Poor behavior on the part of doctors comes in many forms.  According to surveys of doctors themselves, rude, bullying behavior in the office or hospital is the most frequently observed bad conduct.  Some doctors believe themselves a cut above the rest of us and certainly a cut above their patients.  They treat nurses and office staff, and sometimes even other doctors, with contempt.  They yell and call names.  They expect to be pampered and to have everything go smoothly and according to their wishes.  When the usual problems of daily life occur, they react badly.  If the bad behavior occurs in the office of the doctor who owns the practice, there is little anyone can do, except find another job or another doctor.  If it occurs in the hospital, other members of the staff or of the administration can call the misbehaving doctor onto the carpet.

Among the other forms of bad doctor behavior “on the job” are mocking patients behind their backs, being physically aggressive with staff, use of racist language and insults, being intoxicated, making inappropriate sexual advances to patients and staff, and lying about credentials.  All of these examples come from surveys of doctors asking about their colleagues and what they have observed.

Away from the job, doctors misbehave as well, although they have a little more latitude when they are on their own time and away from the office or hospital.  Even though it may occur “off the job” doctor misbehavior is a problem because it undermines the respect people have for doctors and weakens the physician/patient relationship.

Social media is a frequent site of “off the job” misbehavior for doctors as it is for many other citizens.  Much of this bad behavior takes place on Facebook, where the doctor may be and often is identified as a doctor.  Facebook misconduct includes racist language, insults, sending sexual images and images showing drug use.

Some doctors post videos of themselves interacting with unconscious patients.  Famously, the surgeon performing a procedure on comedienne Joan Rivers took a selfie of himself with the unconscious Ms. Rivers without her permission.  This might not have sparked the attention it did had she not died as a result of the procedure.

Some pictures or videos of patients do not blur their faces, which allows them to be identified and which destroys the privacy of their medical care.  If done without the advance consent of the patient, this is a serious breach of ethics and of the HIPAA rules.

Other instances of doctors behaving badly relate to criminal acts.  They may be criminal acts against patients, such as sexual assault or inappropriate touching.  These are especially problematic when the patient is unconscious and cannot appreciate and report the violation.

Criminal acts by physicians most often involve fraud against either health insurance companies or a government program, which pays for treatment.  The federal government regularly reports on doctors it has caught who submit bills for medical treatment that never happened or which was not medically necessary.  Sometimes these frauds reach into the millions of dollars and involve a network of doctors and other providers.

There is a phrase used in connection with keeping travel safe that applies here:  “If you see something, say something.”  Bad behavior that is ignored is not going to stop.